> Ebooks>Create your own 3D Games with Blender Game Engine 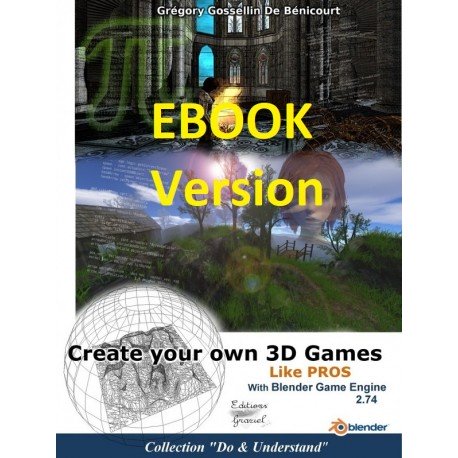 Create your own 3D Games with Blender Game Engine

With Blender (free and Open Source), you can model, animate, create a 3D rendering and have a game engine. With this book, we invite you to try to create directly several game projects. With these projects, about a hundred recipes will help you to create any type of game.

Reserved, for a long time, to a small circle of enthusiast developers, 3D is not yet commonly used by independent video games development studios (the Indies). It's for a good reason: the entrance ticket is relatively high.

With Blender (free and Open Source), you can model, animate, create a 3D rendering and have a game engine. It is a perfect tool for the beginner and for the one that wants to create a commercial game. Blender is also a complement to tools like Unity, CryEngine, Unreal Engine and other commercial engines.

Thanks to the resources freely available to everybody on the Internet, you don't have to be graphic designer or programmer to create a game.

You don't want to read 400 pages of theory about modeling, animating and programming in python? This book was written for you. You are invited to create directly several game projects: a platform game (like Super mario), a First-person Shooter (like Doom, Far Cry or Half-Life), a Third-person RPG (like Tomb Raider, GTA or Watch Dogs), a voxel sandbox game (like Minecraft), a car race and a flight simulator. With these projects, about a hundred recipes will help you to create any type of game.

If you aren't an addict, it'll come to you sooner than you realize. It's more fun to create a game than to play with the last blockbuster. You'll be the architect of a new world, with its own rules. The only limits are the one of your imagination...

High technology enthusiast, games addict and 3D geek, the author wants to honor these games that have revolutionized this domain.

«Make professional’s techniques accessible to everybody».

Books of this collection are organized in this way: projects, recipes on which the projects are based, and sheets for beginners and those who want to increase their knowledge.

«A lot of technical books aren't read beyond the first pages because time to acquire knowledge is too important».

By trying directly to create a game, we want to make the techniques learning easier.

Parents who want to help their children to transform their videogame passion into a creative recreation.

They are talking about the book (french):